Semi Trailer Wrapped Around PyLon After Being Hit by Train, Heavy Tow Truck Used for Recovery

Seeing a tractor trailer wrapped around a pylon and a heavy tow truck nearby can be a concerning sight to see while driving on the road. The Gerlock Towing & Heavy Haul team recently responded to a customer who was in that very situation.

The Gerlock dispatcher learned that the tractor trailer had stopped on railroad tracks and was hit by a train. The collision resulted in the back of the tractor trailer wrapping around the pylon. Thankfully, the Gerlock crew is extremely experienced in these situations and a heavy tow truck crew made their way onto the scene.

Along with the Portland Police, Railroad Authority, and the Multnomah County Bridge Engineer, the heavy tow truck team were able to secure the scene and carefully remove the trailer from the road. Kudos to the heavy towing team on a job well done! 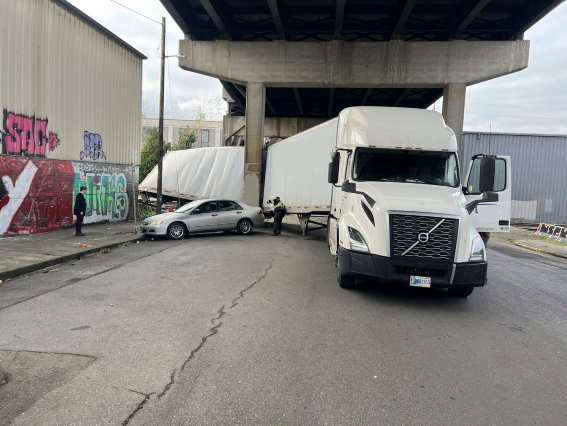 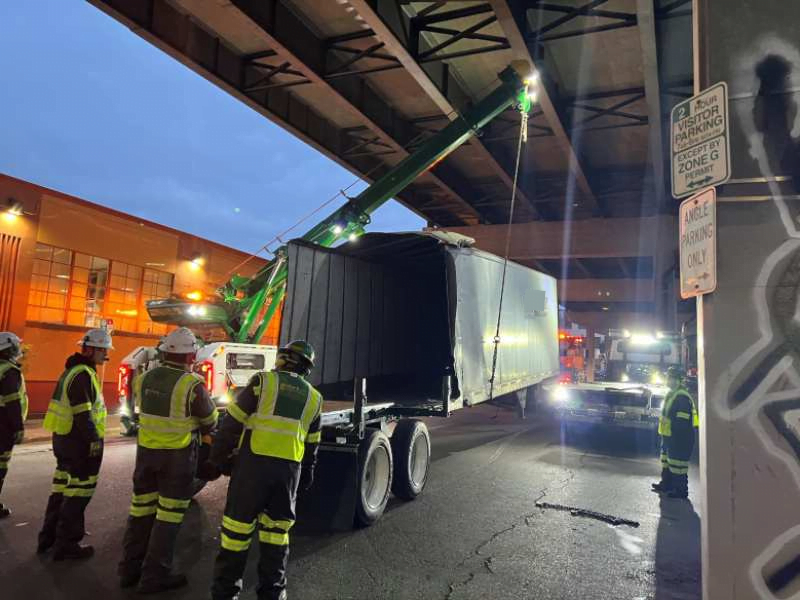 Details of Semi Trailer Wrapped Around Pylon After Being Hit by Train, Heavy Tow Truck Used for Recovery

Gerlock Towing & Heavy Haul, Portland’s largest heavy duty company, recently responded to a customer in need of a heavy tow truck. The customer called from SE Hawthorne Blvd, Portland, OR requesting a heavy tow truck after his tractor trailer stopped on railroad tracks and got hit by a train. The collision caused the back of the semi trailer to get wrapped around the pylon.

The heavy tow truck crew of six left headquarters and made their way to the scene. They brought with them a 50 ton rotator, 65 ton Rotator, 40 ton Tilt Bed Roll Back, Tractor Trailer, Service Truck, and an incident response trailer unit. Special equipment used included Sonetics headsets, Iver Tool, and a custom trailer dolly.

Once they arrived, the heavy tow truck crew assessed the situation. Portland Police, Railroad Authority, and the Multnomah County Bridge Engineer were present. The tractor trailer was empty and there was a metal pole that was lodged into the back of the trailer. The heavy tow truck crew decided that it needed to be cut first.

Next, the heavy tow truck team winched the unit forward to an area that had more space. They unhooked the tractor and moved it out from under the trailer, and then hooked the 50 ton rotator to the kingpin. Using chop saws and Sawzall, they finished cutting the two pieces apart, crane lifted the front half of the trailer, and then deployed a trailer dolly under the back of the front half of the broken trailer.

The Gerlock heavy tow truck crew winched and loaded the compromised trailer onto the landoll trailer before securing it and towing it to the yard. In about six hours, the heavy tow truck team had this job completed. While a major project, we were able to use our well-maintained fleet and skillset to get the situation under control.